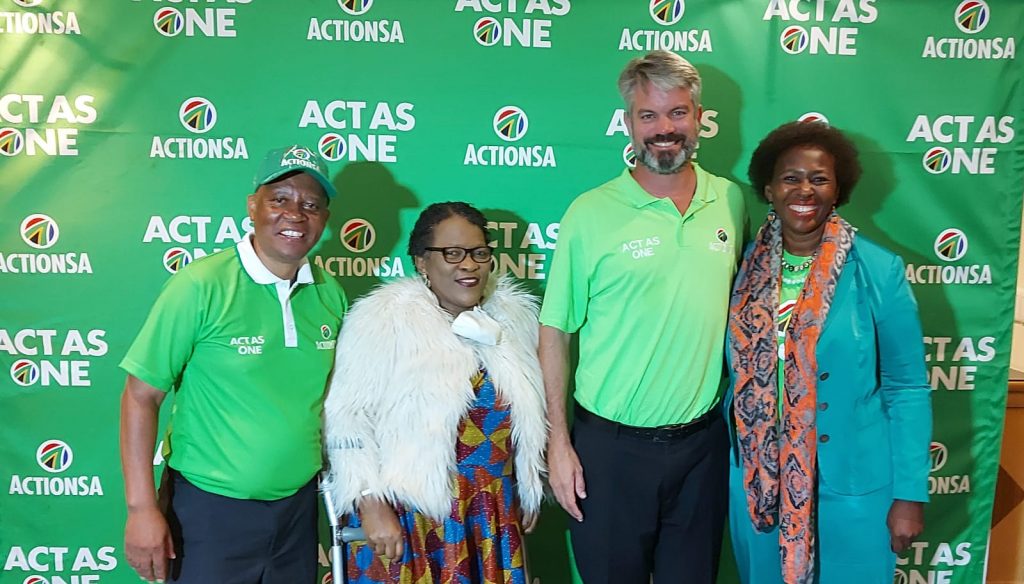 On Monday 16 November, the ActionSA National Leadership began its KwaZulu-Natal leg of the #ActAsOne Tour.

Our programme has seen the Party’s leadership engaging people in the Durban CBD, Umlazi, Chatsworth and Umhlanga, with further plans to visit Phoenix, KwaMashu and a variety of other areas in the next few days.

What I have seen is a City whose people are desperate for change for a new and credible alternative to the ANC.

It did not seem to matter who I was talking to or where they live, the people of Durban are fed up with the current political parties.

Of all the metros in South Africa, eThekwini averaged the lowest poll in last weeks by-election at just 18%.

This is a clear indication that the residents of Durban do not believe that voting, even at the most local level, produces any benefit for them.

During our visit, we have discovered eThekwini’s version of the Jozi@Work programme, that I shut down as the Mayor of Johannesburg in favour of a system which would be rotated in an open, fair and transparent manner.

This programme, just like in Johannesburg, is a temporary work opportunity programme which is reserved for card-carrying members of the ANC, inaccessible to the ordinary people who should access these opportunities.

We met many business owners in Durban who complained deeply about the municipality’s failure, to support their efforts, having to deal with incorrect municipal bills, and an unresponsive City that charges obscene rates, in exchange for little in the way of services.

In particular, the people I have met, in eThekwini are very angry about the failure of our national government to manage our borders.

The recent incident with Bushiri and his wife has become the proverbial straw, and the people of Durban are fed up with the borderless nature of the country we live in.

After these discussions, ActionSA will be writing to the Judicial Services Commission, to demand a full investigation into the conduct of Thandi Theledi, in her handling of the bail hearing of the Bushiri’s.

Parliament has heard that the Department of Home Affairs, brought the evidence of flight risk to the court and allegations have arisen, about the Magistrate being a member of Bushiri’s church.

These matters must be investigated because the South African people have been failed in this matter.

We will await the response of the JSC, but ActionSA is committed to any action that ensures this injustice on the South African people is investigated and, where necessary, acted upon.

I had the pleasure of meeting two great South Africans, experts in the education sector, who offered their support to ActionSA’s policy development process.

These two citizens of Ethekwini, have a wealth of knowledge as to how ActionSA can achieve its commitment to an education revolution, and make tertiary education more affordable for more young people.

I was surprised in my visit to discover people from different political parties, some of whom have resigned from paid jobs, to join ActionSA.

Peter Graham, the former Ward Councillor, for Ward 110, has resigned and joined ActionSA, no longer recognising the DA as a political party, that has any hope of unseating the ANC.

Nobuhle Mazibuko, has resigned from the ANC after many years of membership.

She was in exile in the 1980’s in the former Soviet Union, and has come to despise the levels of corruption and self-interest in the ANC.

Few places reveal this more than right here in Ethekwini, where your former Mayor, stands accused of corruption, and racketeering to the tune of R400 million, and your City Manager, was re-arrested just a few days ago for breaching his bail conditions.

Both of these great South Africans are here with us this morning, and I am proud of their bravery, and their willingness to walk away from what is wrong with our political system, and help build something which puts the people of South Africa first.

This Ethekwini-leg of the #ActAsOne Tour, has clearly demonstrated the need to consider contesting eThekwini in next year’s local government election.

With the ANC sitting on just 56%, it is clear, that ActionSA could be the catalyst that will bring the ANC under 50% in eThekwini, come the 2021 Local Government Elections.

ActionSA is very clear that South Africans, across our country, are calling for an alternative, one that can unseat the ANC and deliver a new alternative.

We have engaged many residents in Durban, who are excited about the prospect of supporting this campaign, and we call on all the residents of this great City, to stand behind ActionSA.

In 2021, the Ethekwini Municipality can be taken away from the ANC!

Let me repeat that again!

To those, who have grown used to the ANC’s failures, corruption, and mismanagement here in this City.

Ethekwini can be taken from the ANC in 2021 and a new, brighter future can arise for the people of this City.

It is going to require the people of this City to Act As One, for jobs and the economy and against corruption and greed.

It is going to require the people of this City to Act As One, for service delivery, and against cadre deployment.

It is going to require the people of this City, to Act As One, for better policing, and against crime.

I call on the people of Durban, to Act As One, because the time for talk is over.

It is now time for Action.