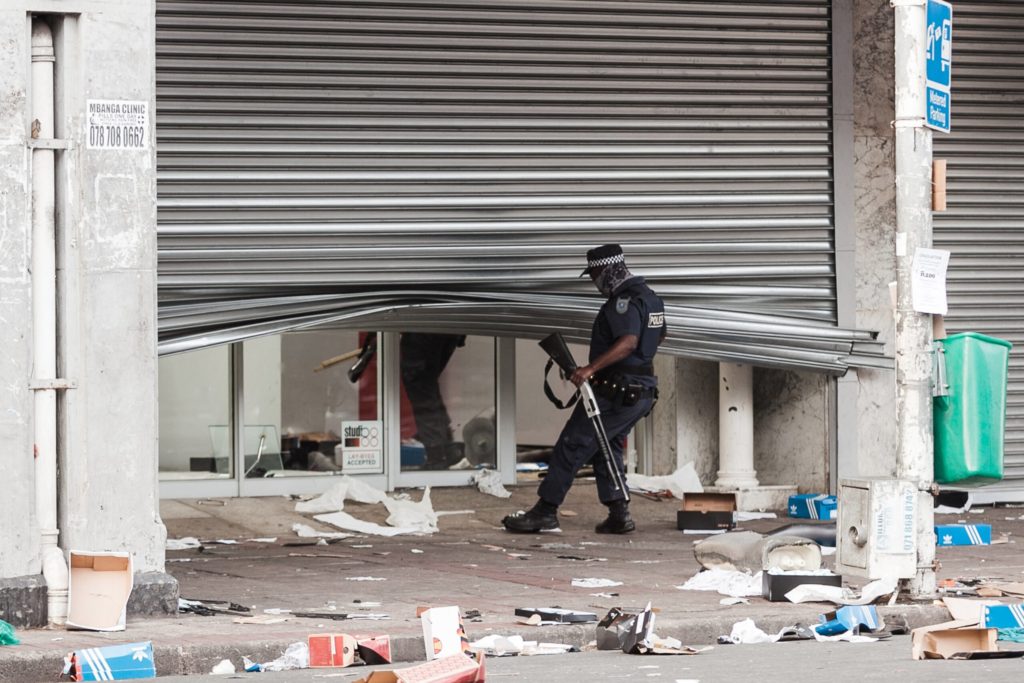 Have you been affected by the violence and looting in KZN and Gauteng? Share your story, and join our class-action lawsuit against this government.

ActionSA will pursue a ground-breaking lawsuit against President Cyril Ramaphosa, the Minister of Police, Bheki Cele, the members of the Security Cluster, and the African National Congress (ANC), amongst others, following the looting and lawlessness which has terrorised residents and businesses across the provinces of Kwa-Zulu Natal (KZN) and Gauteng.

President Ramaphosa, Minister Cele, and the rest of the Executive have a positive legal obligation to uphold and maintain law and order. It is their constitutional duty to ensure that they take proactive and reasonable steps to protect and preserve the rule of law – in so doing, they ensure the protection of our constitutional order and the rights of every South African. A failure or omission to faithfully perform this legal duty must carry consequences as real as those experienced by South Africans, who have lost their lives and livelihoods because of the Executive’s incompetence and wilful inaction.

That is why ActionSA calls on all South Africans who have been negatively affected by the recent violence and looting to join our ground-breaking lawsuit against the ineffectual and incompetent Ramaphosa and his government. South Africans can share their experiences and join our legal action by going to: https://www.actionsa.org.za/your-story. We will then engage those cases which provide the greatest chances of success against Ramaphosa and the executive on behalf of South Africans.

The legal action we are embarking on will be the first of its kind in democratic South Africa and will seek to finally hold the ruling government to account for its poor governance. We believe that there is more than sufficient jurisprudence that merits this a strong test case, and assists us in holding the government to account for its willful failure to ensure proper law enforcement and the protection of lives, livelihoods and property.

While large sections of KZN and Gauteng witnessed the destruction of private and public property, the end of businesses and livelihoods, the breakdown of law and order, and the sad loss of life, Ramaphosa and his executive remained deadly silent, and inactive, till the latest moment possible. As South Africans, our pleas for assistance were met with silence until the situation was out of control.

It was only on Monday, following several days of looting, that the President finally authorised the deployment of the South African National Defence Force (SANDF) – a move that was too little too late.

Despite numerous opportunities, neither Ramaphosa nor Cele have provided any real reason for their failure to take decisive and preventative action against what is so plainly coordinated criminality. South Africa finds itself in this dire state because President Ramaphosa and Minister Cele willfully failed to mobilise and coordinate our law enforcement agencies at an early stage.

Without a doubt, the present looting and violence in our communities find their roots in the corruption fuelled factional battles within the ANC – battles between Ramaphosa, former President Jacob Zuma, their proxies and those external of the ANC who have made themselves force multipliers to those  factions and proxies. Equally, there are substantial allegations that the fires of mass looting and criminality have been stocked by those within the ANC ranks. The ANC – a truly criminal organisation masquerading as a political party – cannot be allowed to walk away scot-free after endangering the people of South Africa.

That is why ActionSA will equally join the ANC in these coming proceedings. This criminal organisation must be held accountable. Peace-loving and law-abiding South Africans deserve nothing less. By its actions, the ANC has lit the tinderbox that is the above 70% youth unemployment, widespread poverty and gross inequality which has also expressed itself through the present riots. Whilst we cannot condone violence and criminality, it is clear that many are angered by Ramaphosa’s impotent leadership of the economy.

Ultimately, the present circumstances will have far-reaching implications for South Africans across every walk of life. Already, there are incidents of food shortages in different residential areas as shopping centres have been ransacked by looters; jobs are under threat as businesses are forced into closure or have been burned down; more lives are increasingly at risk as the safety of health workers is put under threat. Indeed, the threat to the health and wellbeing of South Africans is especially concerning in light of the COVID-19 pandemic. The current lawlessness will only serve to further delay an already compromised vaccination programme.

As ActionSA, we continue our call to all sectors of society to exercise calm, and respect for our rule of law. We are unequivocal in our belief that Ramaphosa and his ANC government continue to let down ordinary South Africans.

Through our decisive commitment to ethical leadership and the rule of law, an ActionSA government would never let this sad state of affairs come to pass. ActionSA stands ready to provide an alternative to the broken political system that has failed our people.